From Vermintide 2 Wiki
(Redirected from Clanrats)
Jump to: navigation, search

The Clanrat is a type of Skaven Infantry.

Clanrats wield a number of different single-handed weapons, like rusty swords and clubs. Some Clanrats carry wooden shields in addition to their hand weapon. These enemies are statistically similar to ordinary Clanrats, but they are able to block attacks.

The Clanrat forms the mainstay of the Skaven army, a man-shaped mass of filthy matted fur, and weeping lesions topped with glowing red eyes and chisel-teeth. They are the embodiment of debasement, the nobility of mankind stripped bare, leaving only base appetite and cunning.

Armed with scavenged weapons and clad in rusting, patchwork armour, lone Clanrats are little threat to a seasoned warrior. Even small groups can be overcome if hearts remain stout and purpose undaunted, for they lack the discipline for shieldwalls or similar defences. Clanrats’ true strength lies in overwhelming numbers, in a tide of shrieking, stabbing vermin given courage by the verminous press of bodies. They scurry from hidden tunnels and concealing shadows, fighting with desperate ferocity until their ranks are broken, and their courage fails alongside. 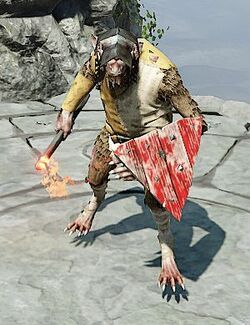