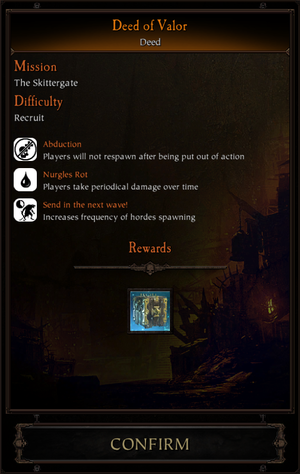 Heroic Deeds are tailored missions that are consumed only upon completion. They offer a wide variety of challenges with set difficulty levels.

All present party members will receive the specified reward upon completion. Matchmaking is disabled in this game mode.

Based on the rarity of the deed a different number of deed effects are attached. Starting with green deeds which have 1 effect, over blue deeds with 2 effects and orange deeds with 3 effects.

The example on the right shows a Deed of Valor on the mission The Skittergate. The Difficulty is set to Recruit and 3 random Deed Effects have been applied. The Reward is an Emperor's Strongbox upon completion.

Players will not respawn after being put out of action

Back to Basics[edit | edit source]

Hero Power limited to starting value. Removes all talents, properties and traits from the player.

No pickups will be found in the level

Specials spawn with much higher frequency and in larger numbers

Send in the next wave![edit | edit source]

Getting knocked down instantly kills the player.

Note: this refers to the downed state in which other players can revive the downed player. If a hero dies, they will still respawn.