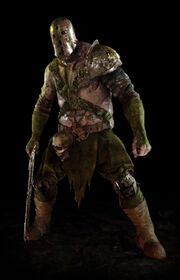 Marauders are a group of Chaos Enemies in Vermintide 2.

Barbaric tribesmen from the frozen north, Marauders are natural-born fighters, tempered by a life of hardship, who despise the soft-bellied Empire and its notions of laws and discipline. Theirs is an existence where only the strong survive, where worth is proved upon the field of battle, not by cowering behind walls of stone and steel.

Marauders come to the fight in a storm of axes, sword and clubs, praises to the Dark Gods howling from their lips. Such a sight is born from the darkest of legends, an assault fit to chill the heart of even the bravest soul and sweep away the strongest defence.

On the battlefield, you will encounter Marauders with various skillsets and specialisations. Veterans of the battlefield, our heroes have developed their own slang to refer to each Marauder variant to aid in quick identification and warning. What the Rotbloods call one another, we can only guess.

"A mass of rippling muscles, the Raider is a determined huntsman; while he draws breath, he pursues the quarry with unflagging determination. Engage with care, and be ready to fight to the death, for there can be no escape."

Bulwarks carry a hand weapon and a shield.

"If you thought encountering a Raider was challenging enough, wait until you clash blades with his brother-in-damnation, the Bulwark. Adept at blocking attacks and capable of staggering you with a weighty shove, a Bulwark requires tactics to defeat. Only once past his shield can you land a telling blow, so sidestep with care and strike with surety."

"The most fanatical and ferocious of the Rotblood tribe, the Savage enters battle with an axe grasped tight in each hand, throwing himself at the enemy in all-consuming frenzy. A level-headed defence and precisely-timed counter-attacks are key to surviving his assault."

Maulers carry a large two-handed axe. They have a slow but powerful attack.

"The Mauler has earned his name on countless battlefields, employing a combination of raw might and a massive greataxe to shatter enemy armour and bones. Stay light on your feet, and be ready to dodge. If he lands a blow, you’ll find yourself in the dirt with a broken bone or two to boot."