Rasknitt is a Skaven Grey Seer, previously known as "The White Rat", and the main antagonist of the Vermintide-series. In Vermintide 2, he is encountered first during the prologue, where he meets with the other enemy leaders and he is the final boss at the end of The Skittergate. He is a powerful magic user and as cunning as Skaven come.

Rasknitt wears blue-grey robes and had a skull-helmet made from an unknown animal, called the Helm of the Thirteenth Seer. Dark magic lingers about this ancient helm, and chittering voices whisper advice. It seems no wonder Raksnitt went mad.

Clan Fester was an old Skaven clan, which contracted the Brood Blight, a serious epidemic which stopped their breeders from spawning new ratkin. In these desperate times appeared Rasknitt, who promised a cure for the Brood Blight in exchange for enough forces to capture Ubersreik. He was installed as Grey Seer of Clan Fester, and an invasion of Ubersreik commenced. Though the Skaven were successful at first, their plans were twarther by five [Heroes & Careers|Heroes], who ultimately defeated the Warlord of Clan Fester and cornered Rasknitt in his den. Here Rasknitt foothold is literally blown away and he falls into oblivion. He survives his defeat, however, and turns his attention towards new allies. He blames his defeat in Ubersreik on the old Warlord and, using incredible Warpstone technology, starts building a portal which lets whole armies cross vast distances instantly: the Skittergate. Rasknitt tries to have the Heroes killed in their tavern in Ubersreik, but when this plan fails and the Heroes find him and his portal, he reveals that this has been his plan all along and drops the Heroes into the portal.

Using the Skittergate based underneath Helmgart, Rasknitt manages bring forces of Rotblood Tribe in Norsca to Helmgart. However, the Warpstone magic powering the Skittergate is fickle, and during the escape of the Heroes from the clutches of the Skaven, the portal malfunctions again and construction resumes, delaying a full-scale invasion of Reikland, much to the discontent of his new Chaos allies Bödvarr Ribspreader and Burblespue Halescourge. As the attack on Helmgart commences with Chaos forces joining the Skaven, Rasknitt turns to reparing the Skittergate.

Rasnkitt will utilise Deathrattler as a mount during fighting. When Rasknitt rides Deathrattler, he uses a magic shield to negate all damage done to him. He can be damaged normally after dismounting. Once on foot he does not engage in melee, only using warp magic.

Rasknit raises his right arm and shoots three blasts of green lightning at a single player. The bolts can slightly home in on the player and explode on impact, hurting teammates near the player. The damage cannot be blocked.

Rasknit either raises both arms or moves his left arm in a high sweeping motion, and shoots a green lightning pillar towards a single player. The pillar moves quickly across the arena in a straight line, but can be dodged. Getting hit by the pillar causes significant damage over time.

When dismounted, Rasknitt will start teleporting across the arena, usually putting himself in one of the four corners. When approached and attacked by a hero, he will quickly try to disengage and teleport again, which knocks the player back and damages the player. The damage can be negated by blocking. 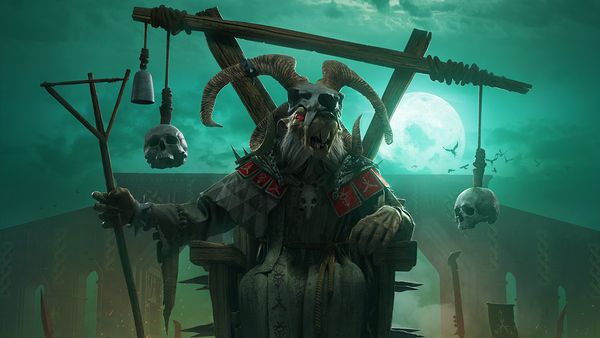