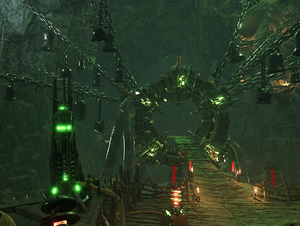 This article is about the Skittergate portal. For information about the Mission, click here.

The Skittergate is a massive Warpstone-powered portal developed by Grey Seer Rasknitt. One entrance is located in the caves underneath Helmgart, while the other entrance is situated somewhere in Norsca. The connection between the two locations allows Chaos Champion Bödvarr Ribspreader and his Rotblood Tribe to instantly cross the vast distance between Norsca and Reikland and invade Helmgart. Construction began during the events of Vermintide 1 and the gate was already operational before the Heroes first encounter it in Vermintide 2, as Chaos forces can be found in the caves underneath Helmgart and are seen marching out of the portal in the Prologue.

To use the Skittergate, a keystaff is needed to activate it. The portal can be opened from both sides with only one keystaff. The inside of the portal is a green void, with a rocky ledge leading from one entrance to the other. The Heroes cross through the portal in The Skittergate to sabotage it in Norsca, before returning to Helmgart. At the end of the main game, the Skittergate is destroyed.

A smaller portal is seen in the Waylaid mission of Vermintide 1. The Heroes are thrown into this portal by Rasknitt and presumably end up in Helmgart. Whether this portal is still functional and where the entrance in Helmgart is is unknown.