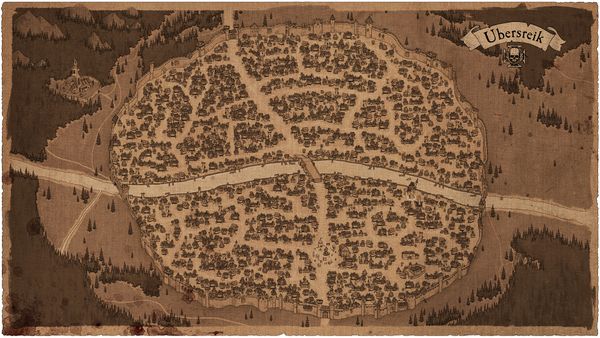 Ubersreik was one of the most important trade centers in Reikland, situated close to the Grey Mountains. During the first invasion of the Skaven, the town was attacked and most of its inhabitants killed.

Ubersreik is a city situated at the mouth of the Grey Lady Pass in Reikland. It is considered to be the throne of the Grey Mountains, one of the most formidable of locales in Reikland, and sits astride the road from Dunkelberg to Bögenhafen, leading to the Empire's capital: Altdorf.

Because of its location on the cusp of the Teufel river, it is primarily a shipping town where cargo and freight is moved down the river. It was chartered by Graf von Jungreud, and is assembled by a Town Council consisting of dwarves and humans alike.

Ubersreik is well-known for its mammoth walls which run the perimeter of the city connecting the city proper to the Great Fortress of Black Rock. It serves as both home to the von Jongfreud family and as a defensive fortress against Bretonnian incursions.